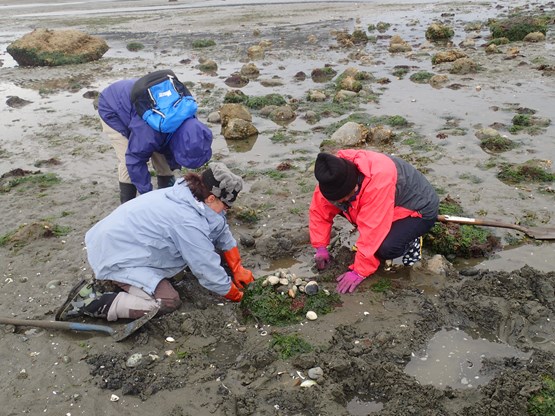 In 1942 two children and an adult died after eating mussels and butter clams contaminated with PSP. The shellfish were collected along the Strait of Juan de Fuca and because of the deaths WDFW closed the Strait to recreational shellfish harvest from April 1 to October 31 each year.

In 2002 WDFW and DOH worked to replace this regulatory closure with a management system based on actual biotoxin data. Clallam MRC became involved and collected shellfish samples every two weeks from several locations on the Strait west of Dungeness Spit. Based on this effort recreational summertime shellfish harvesting in the Strait was opened up for the first time in more than 40 years.

Since 1957 state health officials have monitored Paralytic Shellfish Poisoning (PSP) levels on the coast and throughout Puget Sound. Warnings have been issued when PSP levels reach or exceed the level that the U.S. Food and Drug Administration’s deems unsafe for shellfish consumption. Shellfish and other species that may contain PSP toxin include clams, mussels, oysters, geoduck, snail and scallops. There is no known antidote for PSP, which cannot be destroyed by cooking or freezing.

In 2017 DOH and CCEH reached out again to the Clallam MRC asking if the members would be interested in monitoring the public beach at Pillar Point 35 miles west of Port Angeles. In 2012 the public beach at Pillar Point had been downgraded from “approved” to “conditionally approved” because of poor water quality stemming from bacterial pollution. “Conditionally approved” meant that the beach was closed to shellfish harvest during high risk parts of the year as bacterial pollution can cause illness from contact with the water or from eating shellfish.

The monitoring would include collecting shellfish for biotoxin analysis and assisting with shoreline surveillance – observing and recording the sanitary conditions of the beach on a regular basis. The shoreline surveillance efforts contributed to reopening 27 acres of commercial shellfish harvest area near Pillar Point Park in December 2017. For more information see CCEH 2017 site summary report.

The monitoring efforts consisted of shellfish sampling for biotoxin every two weeks and monitoring the sanitary conditions of the beach and other beach characteristics. Shellfish identification key.